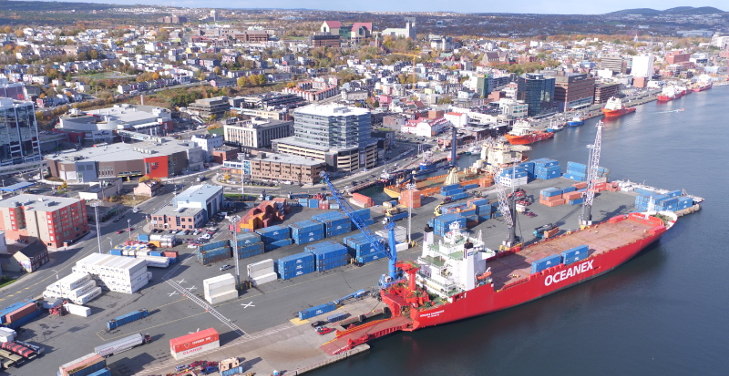 The St. John’s terminal is the Company’s main terminal which has been operated by Oceanex and predecessors for several decades. It is the largest general freight terminal in Newfoundland and it is the only container, trailer and RoRo terminal in the Port of St. John’s.

The terminal is equipped with two RoRo ramps and three Liebherr mobile harbour cranes, an on-site maintenance facility for equipment repairs and is equipped with electrical outlets to handle temperature controlled containers.

Pier Hours
Monday to Friday 8:30 am – 4:30 pm
After Hours Operations Contact:
stjpieroperation@oceanex.com
*Not to be used for booking purposes. Please refer to the Sales & Customer Service contact information for bookings and/or customer service requests.
Montreal

In Montreal, Oceanex has contracted with Empire Stevedoring Inc. for its terminal operations. This facility is well equipped to handle our storage and operational needs.

In Halifax, Oceanex has opted to contract terminal operations at the Port of Halifax to PSA Halifax Limited Partnership. PSA Halifax is a modern terminal facility with over 68 acres of storage space that meets all our operational requirement.